Here are my thoughts from my kids’ latest BJJ tournament. Most parents are obsessed about their kids getting the gold at tournaments. But I could care less about that. If you have easy opponents in your division, then your winning gold doesn’t even matter much. Easy victory is boring. But this time, my girls were the smallest in their division and had very tough opponents. They got silver and bronze, and to me, that’s more valuable than the gold they used to get at previous tournaments when they fought easy opponents. That’s because they had to work a lot harder this time. A gold medal gives you a false sense of superiority. Many champions are used to praise, fame and the feeling of being invincible. When they finally get defeated, they can’t handle it, have a complete meltdown and quit (if you follow MMA sports, think Rhonda Rousey). We learn more from failure than from success, but if you are used to winning, you forget what it’s like to learn from your losses. So no, unlike many parents, I don’t obsess about my girls becoming champions and winning gold. Sure, I want them to strive for it, but it’s not my primary objective. I’d rather see them continue to train hard, learn from their mistakes, improve, and build up their skills and character. And when they go to BJJ tournaments, instead of worrying about the color of their medals, I tell them to have fun, stay safe, do their best, help their teammates, and make new friends. 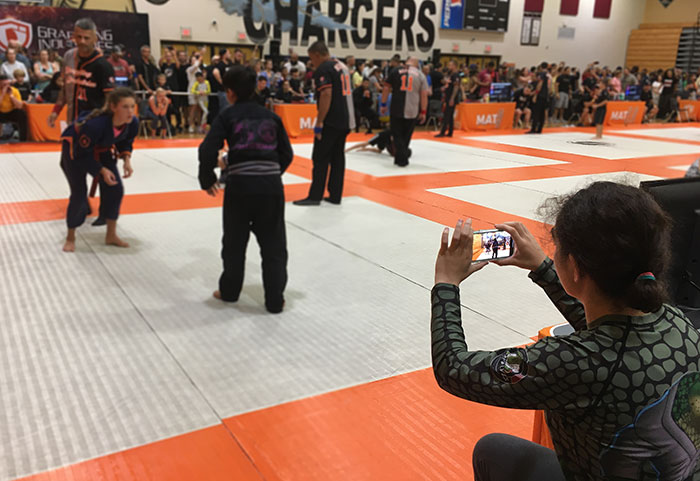 On the photo, one of my proud moments: my daughter (sitting in the bottom right corner) filming her friend’s fight and also coaching her teammate and friend, shouting to her tips and advice during her fight. She is not a professional coach but she often ends up coaching her teammates at tournaments. To me, the help and support she gives to her friends, and the kindness she learns from that, are more important than medals.