How to Make Your Kids Eat Almost Anything (All the Time)

Everyone has a story.  “My kids only eat ‘mac and cheese.'” “Mine only eat pizza.” “Mine don’t eat any veggies or fruits, just fries.”

Such food usually contains chemicals and GMOs, especially if it is ordered at fast food and other restaurants. Also, it is simply not the type of food that we are meant to eat on a regular basis. If you want your kids to grow up healthy and acquire healthy habits, they should be eating lots of fruits, veggies, chicken and fish, avoid the wrong types of carbs and sugar, and eliminate as much of fast/restaurant food as possible from their diet.

Ideally you want them to learn how to cook well for themselves and their families. This will save them time and money, because restaurant and take out food is expensive. They will also learn how to cook healthy food that will hopefully help them avoid many diseases and ailments that people who don’t eat healthy will encounter as they get older.

How do you ‘make’ your kids eat absolutely anything?  First, you can’t make your kids eat anything ‘cold turkey’.  That’s not going to happen – and everyone knows it! It is a gradual process that takes time, and it involves the following steps: 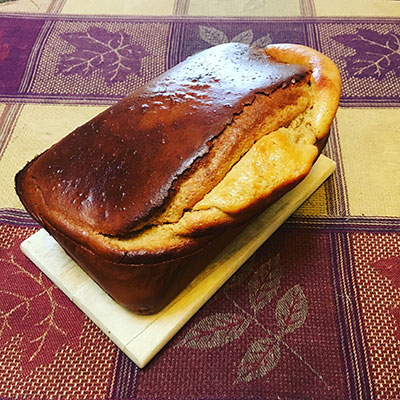 Our bread baked at home with nut flour.

Avoid all restaurants/fast food/cafes, and make everything at home.  This is the most important step. Yes, it means cookies and cakes and baked goods (including bread) should all be made at home to your specs. Without this nothing else is possible.

This is tricky, but you can make them eat the same thing all year long by rotating what you cook from day to day.  This way they don’t get tired of eating the same thing. This comes from lots of experimentation. We typically cook the same things every week, except that every day or two we cook something different.  Some things kids like to eat pretty much every day, especially things like chocolate-flavored fried cheesecake and cashew bread that we bake ourselves.

Don’t cook ‘special’ or ‘separate’ foods for them

They will eat what everyone else eats.  However, you do want variety of foods so that if they won’t eat the main dish, they’ll load up on the side dishes (and when that’s quinoa or buckwheat, you are perfectly fine if that’s all they eat for dinner because they’ll get all the healthy carbs).

You should expand your cooking repertoire by including many things such as soups, sushi and other side dishes, baked goods. Also, use lots of veggies in your cooking, such as in soups and stir-fried food which can be made very healthy and tasty.

Healthy does not mean bland

You can fry wild salmon in cashew crumbs, or make French fries that are baked with a bit of salt and olive oil. We usually cook French fries for Shabbat night, and we rarely have any of our fries survive dinner (and that’s 5 lbs of potatoes for 4 kids).  If any of the fries survive, they are literally fought over the day after. If they want pizza, you should learn how to make it (not hard at all). If they want donuts – ditto. Not hard at all with enough practice! Make it at home, and they will also learn how to cook some simple things themselves. Our 7-year-old can cook an omelette with cheese for everyone (I still flip it for him, as that’s the toughest skill to acquire).

You must learn to improve your dishes. You can’t just learn a recipe and be done.  It has to be improved to the point where it is actually really good, and you can enjoy eating your own cooking on a daily basis.  That’s the key – you have to eat it yourself. You can’t just cook ‘for the kids’, this would never work. After a while of doing this, you get good at making ‘ad hoc’ dishes, or simply starting with a basic recipe and improving it.  This does not mean you only cook what your kids like. If you eat your own dishes, once in a while kids might join you to try it out, and whether they like it or not, they will get an acquired taste for your cooking after a while. So once you improve your dish more and more, kids will actually want to eat it (eventually) – or not, which is fine too.

It’s important to eat your meals together as a family, at least at dinnertime. Not only does it help develop deeper bonding between family members, but it also increases the chances that your kids will eat the food you cook. When the entire family eats the same food together, the kids are more likely to join in.

No junk food in the pantry

Kids will likely choose a junk food over healthy food when given that option. So, restrict their choices. Do not store chips, pop corn, candy and other processed junk food in the house. Replace comfort junk food with healthy alternatives such as nuts, apples, bananas.

Encourage your kids to help you cook, but do not insist if they are not interested. They may be interested later when they see you cook and may want to watch or help – or not, which is fine too. If your kids want you to cook something special, ask them to help or suggest that they cook it themselves. For example, my son sometimes makes his own omelette and my daughter sometimes helps with food preparation. Kids are more likely to eat the food if they helped to cook it.

It’s a known observation which we have have experienced first-hand: children who are breastfed are likely to become adventurous eaters later in life. When they are exposed to a variety of flavors in mother’s milk, they later become more open to trying new foods with a higher chance of liking them when compared to formula-fed children.