The demands to ban assault rifles make no sense. Fully automatic weapons, such as machine guns, are already heavily restricted. So gun control advocates are really talking about banning pistols and semi-automatic rifles that have limited capacity and firepower.  It’s also important to understand that in the evil hands, anything, I repeat, anything can be turned into a deadly weapon and instrument of mass murder. We have seen news of terror attacks and mass killings committed with vehicles, planes, small pistols, knives, and bombs made with materials that are commonly available in stores.

Banning semi-auto rifles is a slippery slope, because what will be next? Should we ban cars and knives too? To illustrate the absurdity of the anti-gun argument, we’ve created a graphic in the style of popular gun control petitions: 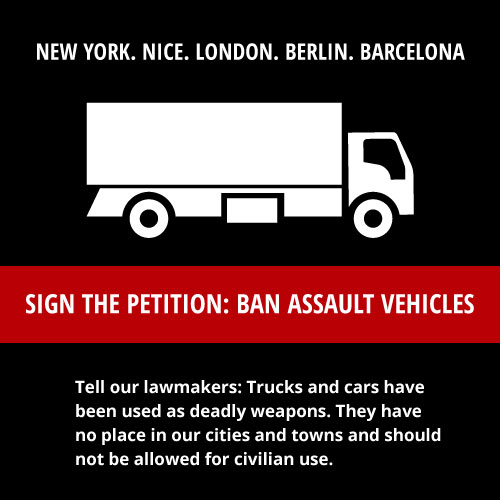 It’s time that gun control advocates face the truth: it’s not the tool to blame, it’s the person who uses that tool to kill people. Let’s not forget that criminals who commit mass murders are fueled by evil ideologies and hate. Let’s also not forget that too many mass killers have been on psychiatric drugs. Let’s address these issues, rather than blaming inanimate objects for human problems. Gun control advocates need to remember: avoiding the hard reality and trying to deflect public attention from real causes of violence can have very dangerous consequences.