We have meals twice a day, in the late morning and in the early evening. So our breakfast has to be filling enough to make the kids happy until dinner (well, they also eat snacks during the day). Here’s a recipe for Cheese Frittata with veggies that we make every day for breakfast. The kids love it, because it looks and tastes almost like pizza, only much healthier and without the crust. 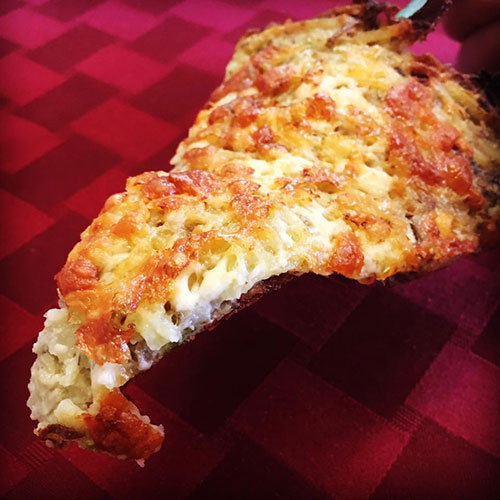 Use a 12 inch non-stick pan (for smaller pan lower the weight of ingredients).  The pan has to be at least 600F (six hundred, not five!) rated, or else you can’t put it in the oven on ‘broil’ setting (which is around 525F). We use Green Pan brand pans, those are very good (not particularly non-stick, but good enough for this purpose).

The veggie amounts are all relative, you will need to experiment with these until you get the texture you like.  Increasing potato weight makes for a little crunchier Frittata, increasing mushrooms/zucchini makes the texture softer.  If the weight is too high, you will not be able to spread it thin enough and you won’t get a crunchy texture.

Warm up the frying pan on medium with a good amount of olive oil and set the oven to broil (highest setting).  Put all veggies into a food processor, use the shredder (not the chopping blade). Put everything in a metal pan and squeeze out the liquid as much as possible. Add two eggs, salt, mix well with a fork. Add the mixture to the frying pan (it should be rather soft and easy to move around).  Use a metal flat spatula to spread the mixture around the frying pan gently in the form of a pizza (basically flat thin middle and more of the mixture pushed to the edge of the frying pan). Too much mixture will not work well, so the above is really suited for the larger frying pans. Press the mixture with the spatula outward from the center towards the edges until everything is nice and flat in the middle and all the way up to the edges. Sprinkle cheese evenly.  Let it fry for maybe 5 minutes until the edges start getting nice and brown (not too much though). Then add to the oven for exactly 10 minutes (set the clock or else you will burn it). Take it out once done with a nice thermal glove and it should literally slide off of the frying pan onto a cutting board. Cut it like you would cut a pizza and serve. Make sure you put the frying pan handle out so that nobody touches it for a while unless you want to get bad burns on your hand.